Members of the Commission serve a staggered five-year term.

The Shade Tree Commission is charged with the custody and control of all trees located in the public rights-of-way of the township. This five-member body prepares ordinances and regulations, develops educational information, and implements programs in support of the township's street trees. The Commission regulates the planting, maintenance, and removal of street trees.

Pruning is the most important task to maintain, enhance and protect the appearance and health of shade trees and other ornamental trees. The Township Shade Tree Commission offers the following guidance on how to properly prune trees in your yard...

The Arbor Day Foundation produced a series of three videos on YouTube that we recommend.
The first video, Ask an Arborist: Why Do I Need to Prune? - YouTube (1:45) describes the reasons to prune trees.
The second video, Ask An Arborist: What are the Rules of Pruning? - YouTube (3:20) outlines 5 factors of form and function to guide you in pruning correctly.
The third video, Ask an Arborist: The ABC's of Pruning – YouTube (4:55), demonstrates how to make 3 kinds of pruning cuts.

**Before viewing the videos, please consider the following points of clarification:
- The videos focus on winter pruning, which is generally the ideal time to prune, but some pruning should be done at other times. For example, broken or dead branches should be removed as soon as possible. Flowering trees should be pruned soon after they bloom.

- The videos advise that branches be removed just outside the branch collar, and example of which is shown in the diagram below. The branch collar is a swollen bulge at the base of the branch, often with coarser bark than the branch. The collar is the tissue that will heal the wound when the branch is removed. If a longer branch stub is left, it will invite decay and detract from the appearance of the tree. Wound sealant or paint should not be used. 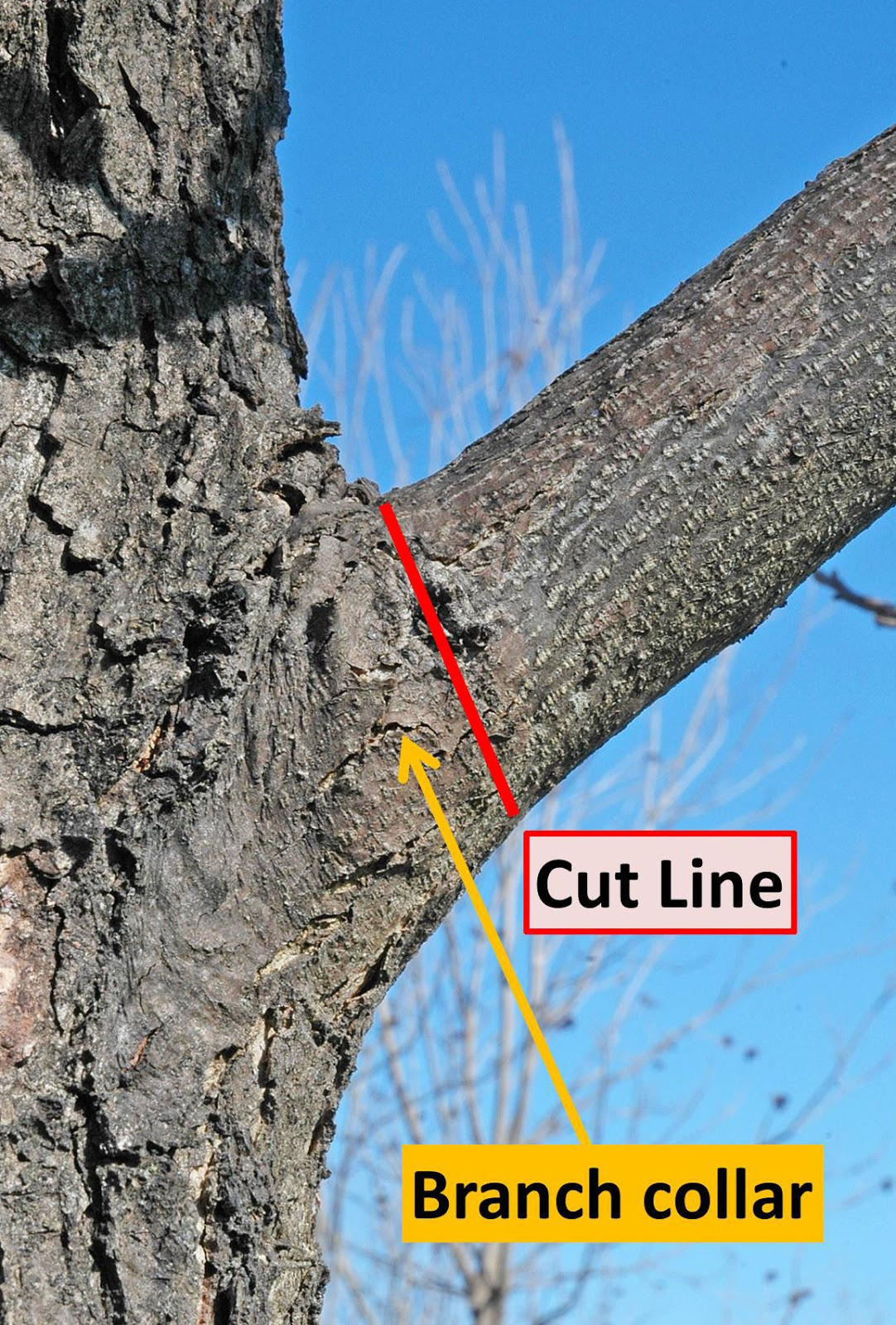 - In the videos, all the demonstrated cuts are made with a pruning saw, which is a correct tool to use on branches over 1” in diameter. Smaller branches can be removed with pruning shears or loppers. Loppers will also work on branches over 1”, but will not make as clean a cut as a saw on very hard or dead wood.

- Always keep safety in mind. Wear gloves and never cut where you cannot see. Goggles are recommended, especially when using a saw and cutting overhead, to keep sawdust out of your eyes. We do not recommend working from a ladder or near power lines. To deal with those situations, or removing large limbs, it is best to hire a qualified arborist who is certified and insured.

The first reports of SLF nymphs surface in mid-May here in Lower Paxton. These were the black and white first instar as shown on the left of the illustration. They will grow quickly through the other life stages and become more noticeable as the colorful flying adult later in the summer. 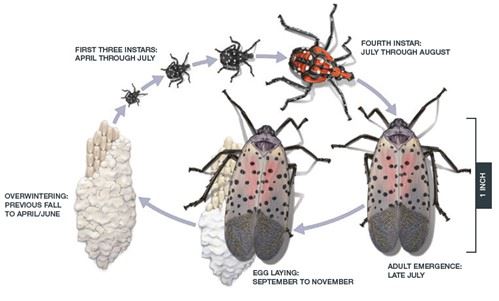 While the SLF has only been proven to kill Tree of Heaven and grapevines, it can damage other vegetation that is otherwise stressed, such as newly planted trees or trees and shrubs that are diseased or drought stressed. Other than potential harm to woody vegetation, SLF is a nuisance, and its honeydew (excrement) can fall on objects under infested trees, including cars, decks, furniture, playground equipment and vegetation. The sticky honeydew is then infected with unsightly sooty mold which is difficult to remove. Heavy coatings of sooty mold can hinder photosynthesis on affected plant. Honeydew also attracts sugar-loving insects such as ants, wasps, and bees.

So what can you do? Various kinds of traps are available, including the most publicized “circle trap” which can take some effort to construct, and the sticky tape which is discouraged because it can trap other (beneficial) insects, birds and bats that are attracted to the captured insects. These can be improved by covering with screen that projects out from the tape to exclude the birds and bats.

Another kind of trap that was used successfully in Lower Paxton last year to capture adult SLF, and that is now capturing the first instar nymphs, is a simple tulle fabric trap that is wrapped around a tree trunk. The fabric is folded in half lengthwise, with a length of twine in the fold. That is the top of the trap, tied around the tree. The top can be reinforced with staples, especially on a smooth barked tree. The fabric ends are folded over each other and stapled together. The bottom of the inner layer of tulle is fixed to the bark with staples. Try to close all the gaps between bark and tulle. Fiberglas insulation may help with this. The outer layer of tulle should be rolled inward on itself to provide a pocket to catch any SLF that fall from inside the trap. This pocket should be held out from the tree with small blocks of wood, styrofoam, etc. to provide open access for the SLF to climb up into the trap. Their instinct is to climb upward, so don’t worry about them escaping out the bottom. See the image below. 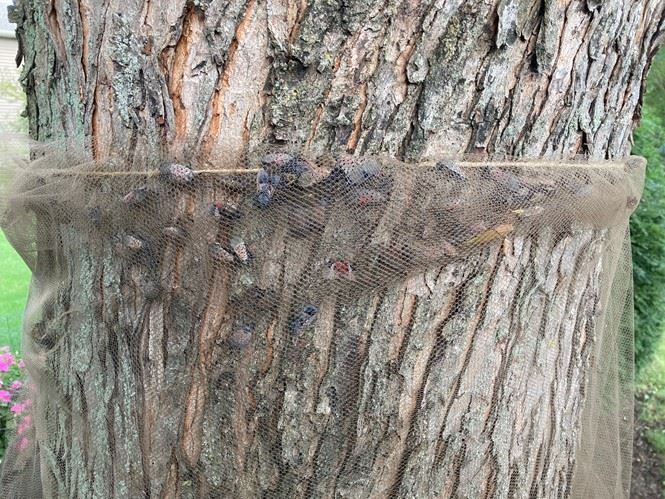